Evolution of RK’s sealed ring chain
RK’s sealed-ring chains received the spotlight back in 1977 during 24 hour endurance racing. It was common for riders to change their non-sealed chains at least three times during the race. However, racers riding with RK’s sealed chains achieved the win with only one chain!


Why should I choose an RK’s sealed ring chain? 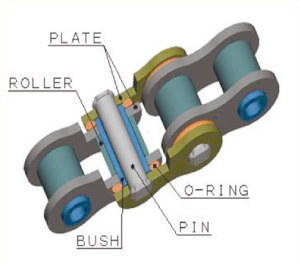 RK’s sealed-ring chains offer less torsional friction and increased high-stress, high-speed performance.
From the beginning of a race to the end, RK’s sealed-ring chains deliver more consistent horsepower to the ground than non-sealed chains.
The nitrile butadiene seals ensure that lubrication stays inside the chain while keeping dust and dirt out.
Most RK chain seals have lubrication pools that protect against high speed abrasion, heat build up, torsional flex and loss of lubricant under extreme conditions, resulting in longer life for the chain and sprockets.


Will I lose horsepower by running a sealed ring chain?
The answer is yes and no. It is true that initially non-sealed chains do produce less friction w hen compared to sealed chains.
However as time/rpm increase, sealed-ring chains significantly outperform non-sealed chains.
During normal use chains heat up and expand; this expansion can create friction resulting in horsepower loss. Due to the increased internal lubrication of sealed-ring chains, friction is reduced, allowing the chain to more freely transfer horsepower to the ground.

Why does RK have so many sealed ring chains?
RK currently has five types of sealed-ring chains and each has its own features and benefits. After several years of development,RK produced the XW seals which drastically improved the chain life and performance.
As racing expanded into several different genres, RK added the ultra thin U-Ring and UW-Ring.
Each seal is specifically designed for a particular use to provide the ultimate in rotating efficiency while providing longer wearlife.

Laser Marking
In the DRIVE CHAIN market, quality requirements are increasing every day with an emphasis on chain weight and strength. Usually the chain maker’s name and chain model are punched on the outer-plates of the chain. These punched marks although mild and shallow, reduce the thickness of the plates and therefore reduce the fatigue resistance strength of the chain. We have modified our method of marking chain from punching to Laser 7 years ago. The following photos show each marking method.